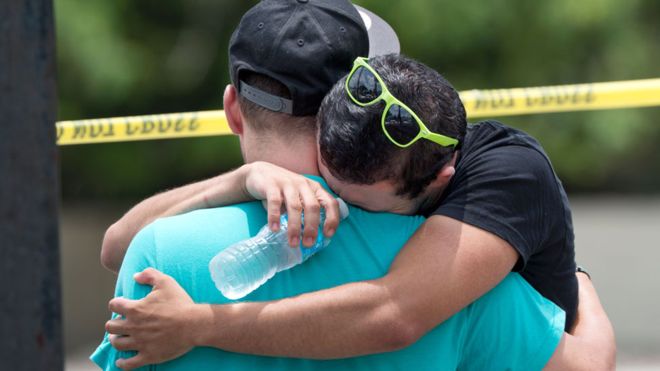 Thousands of people are physically and sometimes brutally attacked each year in hate crimes. Such offences not only affect the victims, but also the thoughts and behaviour of others.

Within 24 hours of the massacre of 49 people at a gay nightclub in Orlando, protests and vigils were joined by thousands in London, Sydney, Hong Kong, Bangkok and many other cities around the world.

Although a particularly stark example, the response shows how the effects of hate crime are not limited to the immediate victims: they also affect others who learn of such events.

Over the past five years, the Hate Crime Project at the University of Sussex has investigated these wider impacts of hate crime, looking at how simply knowing a victim, or even hearing about an incident, can have significant consequences.

Many such attacks take place: in England and Wales, for example, the number of hate crimes recorded by police has increased sharply, rising 29%, to more than 80,000, in 2016-17.

Race hate crimes were most common, but victims might also be targeted because of their sexual orientation, religion, disability, or because they are transgender.

As a result of hearing about hate crime in their community, the most common responses were anger, anxiety and feelings of vulnerability.

These emotional reactions had a significant impact on both LGBT and Muslim participants’ feelings of safety.

Many said they took steps to increase their own security and avoided parts of their neighbourhood where they thought an attack was likely.

One Muslim woman described how she had responded to reports of Islamophobic hate crimes, including the murder of 82-year-old Mohammed Saleem, who was stabbed as he walked home from a mosque in Birmingham.

“I do feel vulnerable… and it does affect my behaviour,” she said.

“I become more fearful and avoid going to certain places that I feel might be a risk to my safety. And especially within certain times, I would avoid walking within those areas.”

One reason for these indirect effects is that people feel more empathy for victims who come from their own community.

When they learned about a fellow Muslim, or LGBT person, being abused because of their identity, they put themselves in the victims’ shoes and felt something of what they must have felt during the attack.

This made them feel angry on the victims’ behalf, but also threatened and fearful that they could also become a victim.

These feelings can lead people to change their behaviour – for example, using social media to raise awareness of such attacks – with the effects lasting three months or longer in many cases.

The truth about hate crimes and Brexit
What makes a disability hate crime?
Terrorism v hate crime: How US courts decide
The University of Sussex research demonstrated these effects through experiments in which participants read newspaper articles about someone being attacked.

All the articles were identical, except that some described the attacks as anti-LGBT or Islamophobic hate crimes, while the others portrayed the attacks as random, with no mention of hate as the motivation.

The strength of their responses suggest that hate crimes can have a greater impact on the victims and those in the wider community than otherwise comparable attacks which are not motivated by hate.

What is hate crime?
A hate crime is defined as “any criminal offence which is perceived, by the victim or any other person, to be motivated by a hostility or prejudice” based on one of five categories: religion, faith or belief; race, ethnicity or nationality; sexual orientation; disability; or gender identity.

62,685 (78%) were race hate crimes
9,157 (11%) were sexual orientation hate crimes
5,949 (7%) were religious hate crimes
5,558 (7%) were disability hate crimes
1,248 (2%) were transgender hate crimes
Total is 105% because some crimes fit into more than one category
Among the Muslim and LGBT people who took part in the study, simply knowing someone who had been a victim of a hate crime was linked to them having less positive attitudes towards the police, the Crown Prosecution Service and the government.

They were also more likely to support laws designed to enhance the penalties for hate crime and different methods of policing – for example, special procedures for dealing with victims and more police in the community.

Most had not had any contact with the police about a hate crime, but members of the Muslim group who had been in touch with them were less likely to believe that they would respond effectively than those who had not had contact.

During one interview, a Muslim man said: “For me it seems that a lot of the police force come from a certain background, and sometimes that’s why I think they won’t take it [Islamophobic hate crime] seriously.”

Attitudes towards different forms of justice used to deal with those responsible for hate crime were also investigated.

More than six out of 10 Muslim and LGBT people who took part in the study said that instead of an enhanced prison sentence, they preferred restorative justice – in which victims meet or communicate with the perpetrators in order to explain the impact of their crime and agree a form of reparation.

This, they believed, was more likely to be an effective way to repair the harm caused by hate and prejudice.

One LGBT person said: “I’m not sure that just sending somebody to prison… is going to change somebody’s attitude… Whereas [restorative justice is] a much better route to be able to understand the impact that their behaviour has had on somebody.”

The question for police and politicians now is what they can do to reduce the impact of hate crimes.

One step might be to investigate measures – like restorative justice – that aim to address the harm to both the victim and community.

Another might be to ensure greater use of community impact statements in criminal trials.

With tens of thousands of people affected each year, there are many in the Muslim and LGBT communities, and other parts of society, who will be keen to know the answer.